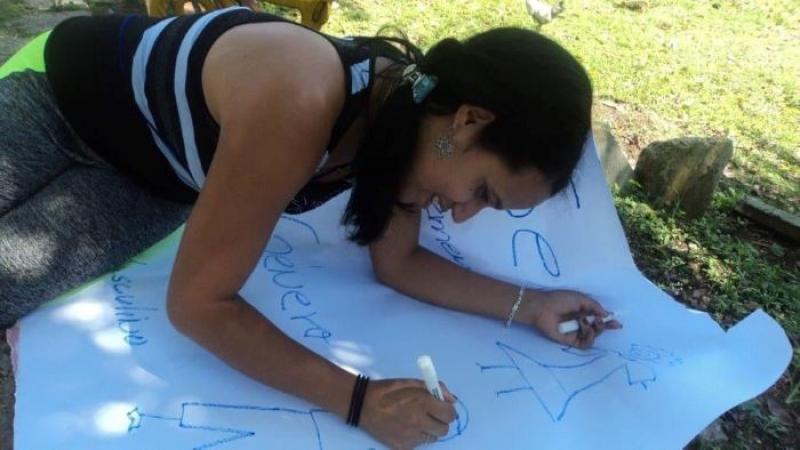 Yudith Mondelo Hernández lives in the easternmost province of Cuba, Guantánamo. One day she participated in a workshop aimed at raising awareness on gender issues in her community. Prior to this, she was unaware of the issues and immediately fell in love with the subject. “What surprised me the most is that in my 24 years I had never heard of the subject. That's how I became more and more interested and asked the organizers to notify me of the upcoming events.”

Perhaps unintentionally, Yudith joined an FAO project, which aims to support the implementation of gender strategies within cooperatives of small agricultural producers associated with the Yateras Agroforestry Company affected by Hurricane Mathew. The project, executed jointly with the Ministry of Agriculture, the Cuban Association of Agricultural and Forestry Technicians and the University of Guantánamo, aims to educate both women and men coffee growers about gender gaps, and empower women to take on and expand into employment spaces traditionally dedicated to men.

“Today I belong to the Working Group for the Diagnosis of Gender Gaps of the Yateras Agroforestry Company in Guantánamo. I would spend my days at home; I don't work. Being a facilitator for the project has allowed me to socialize and learn a lot. The work that these very brave women do is tough and in their work environment, gender equality is not always fully realized.”

“It is a pity that the information on this subject does not always reach key places, where there are men and women who need to change their way of thinking in order to change their behaviour. I have seen many changes in my own life based on what I have learned, especially as a mother. And I'm not going to keep the knowledge, I'm going to share it wherever I have an opportunity to help people transform their mentality towards [gender] equality. ”

Gender equality is one of the priority issues addressed by the United Nations in Cuba, and, along with its national counterparts, efforts are paying off.Gender equality cuts across the work of several agencies, funds and programmes. Results from the last two years demonstrate that all agencies, funds and programmes implement gender initiatives that span over several diverse areas. For example, PAHO/WHO promote “Eyeglasses for Gender,” a project that uses visual communication, music, literature and other artistic approaches to help construct positive gender values in girls and boys. UNFPA prioritizes the prevention of gender-based violence, especially in the areas of health, education and justice sectors. UNDP has supported the first brigade of women inseminators, women who are dedicated to cattle fattening, and establishing networks of women grain producers.

The list is long and, in all cases, public institutions are increasingly becoming more aware and sensitive to cultural stereotypes, which is one of the main challenges that face the country. For now, it appears that Yudith’s story is emulated in many areas of Cuba. Her strength and courage are spreading across the country, particularly with the public policies taking shape. “The most important thing is that the work does not stop, that the workshops and training continues, especially within the areas of production, and the decision-makers.”