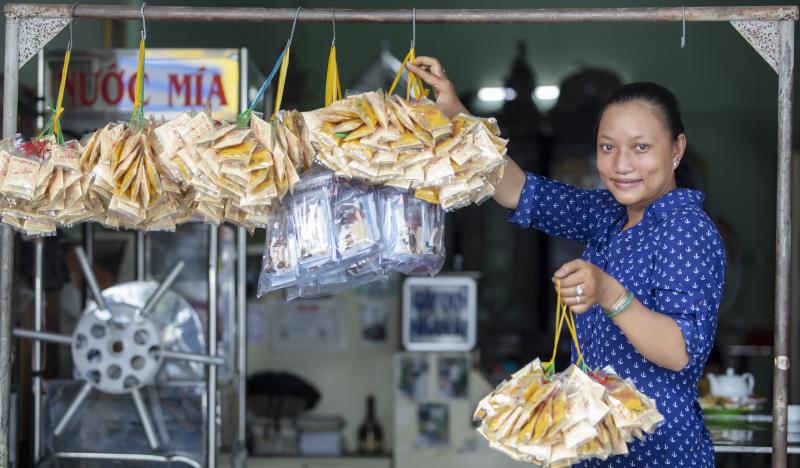 The story of how I got HIV is quite different from many others’: most of them accidentally got it, while since the beginning, I took the risk.

When I decided to marry my first love, even the local authorities advised me against being with him. He was a drug user and possibly HIV positive, they said. My family, especially my mom also tried to talk me out of it. But we are all devoted Christians, I used our faith to argue with my mom. I said, “Jesus came to earth to save sinners. How can you ask me to leave my love when he is in agony? When people are suffering and struggling, we are supposed to help them. What’s more is this man really loves me, and I love him too. Compared to many married couples who spend 30 to 40 years together without love, I’ll rather take a short life with him–even if it lasts only one year–and die in happiness."

We held a proper wedding even. By the time I reached senior year in college, I gave birth to our son, Bo. How miserable the labour and delivery were! The local hospital told my mom that since I was reportedly HIV positive, they didn’t want to touch me and just left me lay there for hours. My mom had to help me escape through the hospital window, and we headed to Tu Du, the biggest maternity hospital in Saigon. I went through a C-section. And it was also when it was confirmed that I contracted HIV, but fortunately, Bo was not.

As for Bo’s father, I have no ill will towards him. He loved me a lot and is a good father. But, he was also a heroin user. When Bo turned two and started to form memories, I did not want our child to learn that their father was an addict. So I asked my husband to quit the addiction or we would leave him. He agreed and went cold turkey, letting me chain him up at home, and somehow he got clean! But afterward, his health went downhill and soon crashed. When our son turned five, he passed away.

After his death, I decided to take up the treatment or Bo would have had no parent left to live with. From the Antiretroviral (ARV) treatment, I was introduced to–and then joined in–a local club for people living with HIV. This is where I met Phuc, my current husband. From the outside, he might seem cold and rough, but he can be really cheesy sometimes! He confessed his love to me by pulling a really pulpy line of “only until the waves in the sea stop will I stop loving you!"

But at the time my son Bo didn’t want me to get married. On his sixth birthday, I asked Phuc to bring us to the beach to celebrate it (hence the “waves” line!) On the way back, Bo suddenly said, “mom, uncle Phuc loves you lots.” Out of surprise, I asked how he knew it and he said, “Because I love you lots too, so I look at you all the time. And I see uncle Phuc also looks at you just like the way I do, so I know he must love you, too.” How about that? Phuc and I got married thanks to my little kid.

Later on, we had a kid together, Nhi. Her birth was also to set an example for others in the club that HIV-positive people can have healthy kids together. Before all members were too scared to be pregnant, for fear of transmitting to the baby. But throughout our pregnancy, both of us committed to the treatment and took all protection measures needed for the fetus, so Nhi was born HIV-free, and was the living proof that we had done the impossible!

That Lunar New Year holiday was the happiest and noisiest ever, as many members came to celebrate it with their newborn babies or to tell us the good news that they were expecting one.

Phuc and I are doing fine financially, and we have together maintained the club–we named it Green Coconuts whose members I take as my family–for 10 years now, making it a safe haven for People living with HIV (PLHIV) in Ben Tre Province. I also gathered other groups in Ben Tre to form what we call a Kindness League, helping children born to HIV-positive parents, and receiving and transferring financial support from donors.

What PLHIV need the most from the society, I believe, is empathy and the willingness to listen, those are more important than money. Sometimes when I help donors connect [with other PLHIV], they see that “my family” own motorbikes or wear a gold necklace, they are not happy, insisting on me finding them someone that fits the description of being poor. I have to explain, that we do not discriminate among members. For instance, I am financially stable, but if they give me gifts, I would take them with utter appreciation and joy! What makes me happy is not the gifts themselves, but the fact that the givers care about us. And we always share, and so the gifts would be spread among other members, and particularly to those who are in need.

One thing I have observed and feel very happy about is that whenever “my family” go to the hospital to pick up the treatment doses, they also take time to visit rooms where more severe cases are being treated. We check up on them and ask if they need anything, and, if so, the members will go back to the League to call for help. Whenever an opportunity to help others arises, we ought to take it.

What should disappear from this life? I would say it is the thought to end the lives of others who are still living. Let me explain: lots of people dictate that if a person used to serve jail time, or is HIV positive, they are worthless. That those people are considered dead, at least socially. But it is those very toxic thoughts that kill them for real. Simple words can be so deadly they can murder human beings, just like that. I always believe as long as one is alive, there is hope.

I have been leading a healthy life with HIV for 20 years now, just by committing to ARV treatment. Honestly, if cancer patients come and ask me to trade their illness with mine, and adding hundreds of gold bars to the deal, I would not take it.

My dream is to pursue higher education, first by having a university degree in Sociology–it’s just my favourite. It would be another example I set for others, especially in my club, that I am HIV positive and I can still realize my dream. I told myself that before I die, I have to earn a university degree, and so I will. If people have dreams, they should let nothing stop them and just follow their hearts. I am applying for the programme this summer! – Chau Bao, Ben Tre

This is the 16th and final story of the Humans of Courage series. It was produced by UN Viet Nam, in collaboration with UN Woman and UNAIDS, as part of 16 Days of Activism Against Gender-based Violence and Worlds AIDS Day in late 2019. The series aims to spotlight the voices of real-life, everyday heroes impacted by HIV or gender-based violence, and their roles in the their greater communities. The 16 stories offer a closer look into the lives of people living with HIV, and survivors of gender-based violence, especially their strong willingness to live fruitful lives–while inspiring love and empathy in their communities.

This is also an important opportunity to recognize the essential role that communities have played–and continue to play–in ending gender-based violence and HIV-related stigma and discrimination, keeping people at the centre and leaving no one behind.