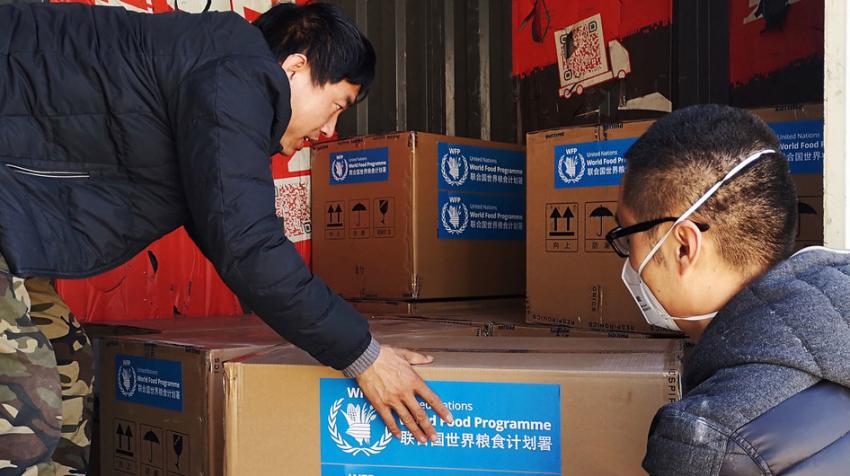 With the coronavirus crisis spreading to more countries with broader social and economic implications, the United Nations is mobilizing its global workforce to help affected Governments to contain or slow the onslaught of this deadly disease.

While the World Health Organization (WHO) continues to lead the global fight against the spread of the novel virus, commonly known as COVID-19, other United Nations entities are also rolling out their responses to the pandemic, which has forced Governments, businesses and people worldwide upend their activities.

“Around the world, UN teams are also working with authorities to support national preparedness and response plans around COVID-19, including immediate health priorities and broader social and economic impacts,” said Stéphane Dujarric, Spokesman for the Secretary-General, at a noon briefing today.

The pandemic is testing the Organization’s ability to deliver as one under the revamped development system.

“While the virus has stopped us going to our workplace, it hasn’t stopped our work.”

In Asia, some country teams, with World Health Organization and other entities, are working to support government efforts in areas such as finance and economy, education and water and sanitation, with immediate support to garment factory and migrant workers and a special focus on women.

In Kenya, the United Nations has offered five communications experts to support the Government’s efforts and met today with 25 business leaders to boost public-private partnerships to address COVID-19.

In Latin America and the Caribbean, United Nations communications experts are supporting the governments’ community awareness and risk communications efforts. In Brazil, the United Nations country team and national partners, in coordination with government authorities, have already activated the contingency plan in the shelters in the north and are disseminating prevention messages in Spanish tailored to communities of migrants and refugees who have arrived from Venezuela, in addition to the regular national campaign in Portuguese.

In a letter to supporters by World Food Programme (WFP) Executive Director David Beasley, he said: “You might not know, but our Headquarters are in Rome, Italy, and while the virus has stopped us going to our workplace, it hasn’t stopped our work.” He stressed that the agency is maintaining all of its operations, prepositioning stocks of food and cash, and mobile warehouses and tents in case they’re needed.  It is also supporting the wider United Nations system with air, sea and land transportation.

“We are entering uncharted territory and working with countries to find hi-tech, low-tech and no-tech solutions to assure the continuity of learning.”

The United Nations Children’s Fund (UNICEF) published a story of five-year-old Yuanyuan from Wuhan, China, who was left behind home as her parents and grandparents tested positive for COVID-19 and were admitted to a hospital.  Medical personnel in the hospital decided to look after the girl, and a volunteer helped keep her company. During pastime, the girl drew a picture of a virus that is surrounded by a dozen hammers.

According to the United Nations Educational, Scientific and Cultural Organization (UNESCO), an unprecedented number of children, youth and adults are not attending schools or universities because of COVID-19.  Governments in 73 countries have announced or implemented the closure of educational institutions, and 56 countries have closed schools nationwide, impacting over 516.6 million children and youth. A further 17 countries have implemented localized school closures.

“We are entering uncharted territory and working with countries to find hi-tech, low-tech and no-tech solutions to assure the continuity of learning,” said UNESCO Director-General Audrey Azoulay. “As countries try to prepare their response, international cooperation is vital to share the most effective approaches and support students, teachers and families.” (See UNESCO’s guidance on distance learning solutions.)

As people are asked to stay home due to school closures, business shutdowns and other movement restrictions, WHO issued a mental health guidance. The United Nations Population Fund (UNFPA) is working to ensure that accurate information is provided to women of reproductive age and pregnant women on infection precautions, potential risks and how to seek timely medical care.  The Food and Agriculture Organization (FAO), which is coordinating prevention, preparedness and detection activities in animals, in liaison with WHO and the World Organisation for Animal Health (OIE), says that there is no current evidence of dogs playing a role in the spread of COVID-19.

With the epicentre of coronavirus infections shifting from East Asia to Europe, countries that have experienced a rapid outbreak could share lessons with those Governments facing the worsening situation or countries that are preparing for such a scenario. UN News wrote a story about how countries now facing the COVID-19 pandemic can learn from China’s experience.