Updates from the field #32: Helping to eliminate violence and discrimination during COVID-19 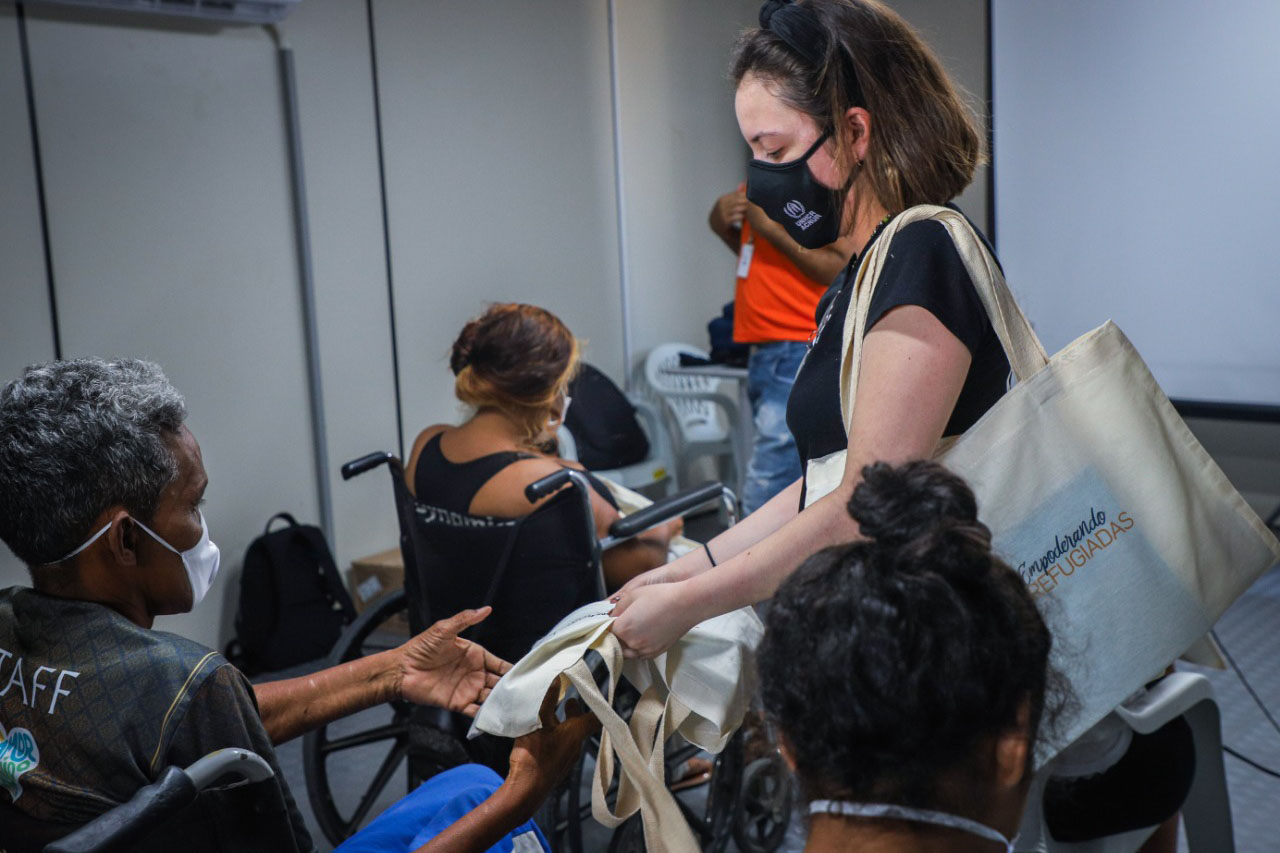 The COVID-19 pandemic has shaken the world at its core, deepening pre-existing inequalities. This global crisis has intensified violence against women and girls, and further prevented the one billion persons living with disabilities from obtaining access to education and vital lifesaving services.

Currently, in recognition of the 16 Days of Activism Against Gender-based Violence and International Day of Persons with Disabilities, today, we highlight some of the UN country teams’ efforts to address these inequalities, especially targeting those most at-risk of violence and discrimination.

In Bhutan, the UN team, led by Resident Coordinator Gerald Daly, has been supporting local authorities in responding to the health and socioeconomic impact of the pandemic, mobilising more than US $1 million in additional resources to protect lives and livelihoods.

The UN Population Fund (UNFPA), the UN Children’s Fund (UNICEF) and the World Health Organization (WHO) provided hundreds of thousands of cleaning, protective and medical supplies and equipment to boost clinical and first response capacities. UNICEF is also supporting the government on vaccine storage and distribution through a grant of more than US $1 million from the Asian Development Bank to expand cold storage infrastructure. For their parts, the UN Development Programme (UNDP) is supporting a rapid socioeconomic impact assessment of COVID-19 on the tourism and manufacturing sectors to protect livelihoods and implement policies to recover better together.

The Food and Agriculture Organization (FAO) worked with the Prime Minister and the Ministers of Agriculture and Health on communicating the importance of boosting local agricultural output. Meanwhile, the World Food Programme (WFP) supported the safe reopening of schools through the updating of food storage and kitchen facilities.

Also, UNFPA supported the creation of emergency shelters and partnered with their Goodwill Ambassador, Her Majesty Queen Mother Gyalyum Sangay Choden Wangchuck of Bhutan, on preventing gender-based violence and the importance of providing access to safe counselling and reproductive health support during the pandemic. The UN Office on Drugs and Crime (UNODC), worked with law enforcement officials, community organizers and the national TV on the prevention of trafficking in person, reaching more than 15 million people.

In Brazil, the Resident Coordinator, Niky Fabiancic, is leading the UN team’s support to authorities on the health and socioeconomic response to the pandemic. This month the Joint SDG Fund for Brazil launched a campaign targeting candidates who ran for mayors' offices in more than 5,500 municipalities.

The goal is to engage local leaders to invest in early childhood development to recover better from COVID-19 and achieve the Sustainable Development Goals (SDGs).

The campaign targeted 11,000 candidates from key municipalities, with five agencies working on the ground to roll out the Joint SDG fund: UNDP; the UN’s Educational Scientific and Cultural Organization (UNESCO); UNFPA ; UN Women and UNICEF  as lead entity.

The UN team is also boosting its “tele-medicine”, or online consultation with doctors, in the Northern region of the country. The focus is on women's health and prenatal care during the pandemic, with the UNFPA in the lead.

And in the Amazon region, the International Organization for Migration (IOM) continues its mobile health units targeting indigenous peoples and migrants coming from Venezuela, with almost 150 medical visits in the first week of December.

The UN Refugee Agency (UNHCR) and UN Women have partnered to support with vocational training of refugee and migrant women, with a special focus on those living with a disability.

In Djibouti, the UN team, led by Resident Coordinator Barbara Manzi, is concerned about how the socioeconomic impact of the pandemic will further deepen vulnerabilities.

The UN is working closely with authorities to prepare for a potential influx of people and respond to the economic consequences of the crisis.

Any such movement of people – even in small numbers – would have a major impact since it would add to an already sustained mixed migration phenomena. Currently, one in 33 people in Djibouti is a refugee and one in ten is a migrant.

With 85 per cent of the trade through Djibouti’s port either going to or coming from Ethiopia, the UN team on the ground is concerned about the potential impact on trade, the economy and food security.

The UN is also looking into stepping up prevention measures for communicable diseases, including COVID-19, malaria and acute watery diarrhea.

To honour the International Day of Persons with Disabilities, the UN team on the ground in Malawi, led by the Resident Coordinator Maria Jose Torres, called on everyone – including the Government, civil society and the private sector – to do more to ensure the full and equal participation of people with disabilities and to achieve the SDGs.

Ms. Torres says that more than 10 per cent of Malawians who live with at least one type of disability continue to suffer disproportionate challenges to access education, health care services and dignified sources of income.

In a statement, the UN team also strongly condemned the recent cases of killings and exhumations of remains of persons with albinism. It called for an end to such attacks and desecration of tombs, as well as continued harmful beliefs that generate discrimination, exclusion and violence against people living with albinism.  The UN team adds:

greater efforts are required to dispel harmful beliefs, to bring perpetrators to justice and to create an environment that can facilitate the full and effective participation of all persons living with disabilities, including persons living with albinism.

The team also noted the multiple challenges faced by women and girls with disabilities, particularly the threat of sexual violence, which has also been aggravated during the pandemic.

On this year's International Day for the Elimination of Violence Against Women, UN teams around the world are promoting the “16 Days of Activism” campaign and boosting their work with authorities and partners to curb violence against women.

In several countries, some iconic buildings are being lit up in orange to raise awareness.

In the Pacific, our UN team in Samoa, led by Resident Coordinator Simona Marinescu, joined authorities and civil society organizations for a joint European Union-UN Spotlight initiative to tackle this urgent problem.

Prior to the COVID-19 pandemic, according to official figures, 86 per cent of women in Samoa experienced some form of violence and half of all women between the ages of 15 and 49 reported to have been survivors of physical violence.

The UN and partners are also concerned that, in the past month alone, more than 90 per cent of children between the ages of 1 and 14 experienced physical or psychological aggression by their caregivers.

Along with the UN team, civil society, organizations and local authorities, the Spotlight Initiative is helping to address the issue at the community level. Village Safety Committees now include the chiefs, the church and women’s committees. Samoa’s “16 Days Healing” campaign started on 25 November and broadcasted nationally and regionally.

In Zimbabwe, the UN team, led by Resident Coordinator Maria Ribeiro, continues to boost the COVID-19 national health and socioeconomic response. In November, WHO delivered personal protective equipment, lab supplies, stationery and information-technology equipment worth US $100,000 to the National Institute of Health Research.

In the country, hunger has become a major driver of urban poverty, compounded by successive droughts and the pandemic. UNDP and other UN entities are exploring ways to advance urban farming.

For its part, IOM and authorities conducted surveys to evaluate the vulnerabilities and needs of those who returned to Zimbabwe as a result of the COVID-19 pandemic. Returnees highlighted the need for support packages that help them reintegrate, and increased access to health care services. The survey is helping put together an upcoming national support scheme for returnees.