Updates from the field #7: Galvanizing resources to fight COVID-19 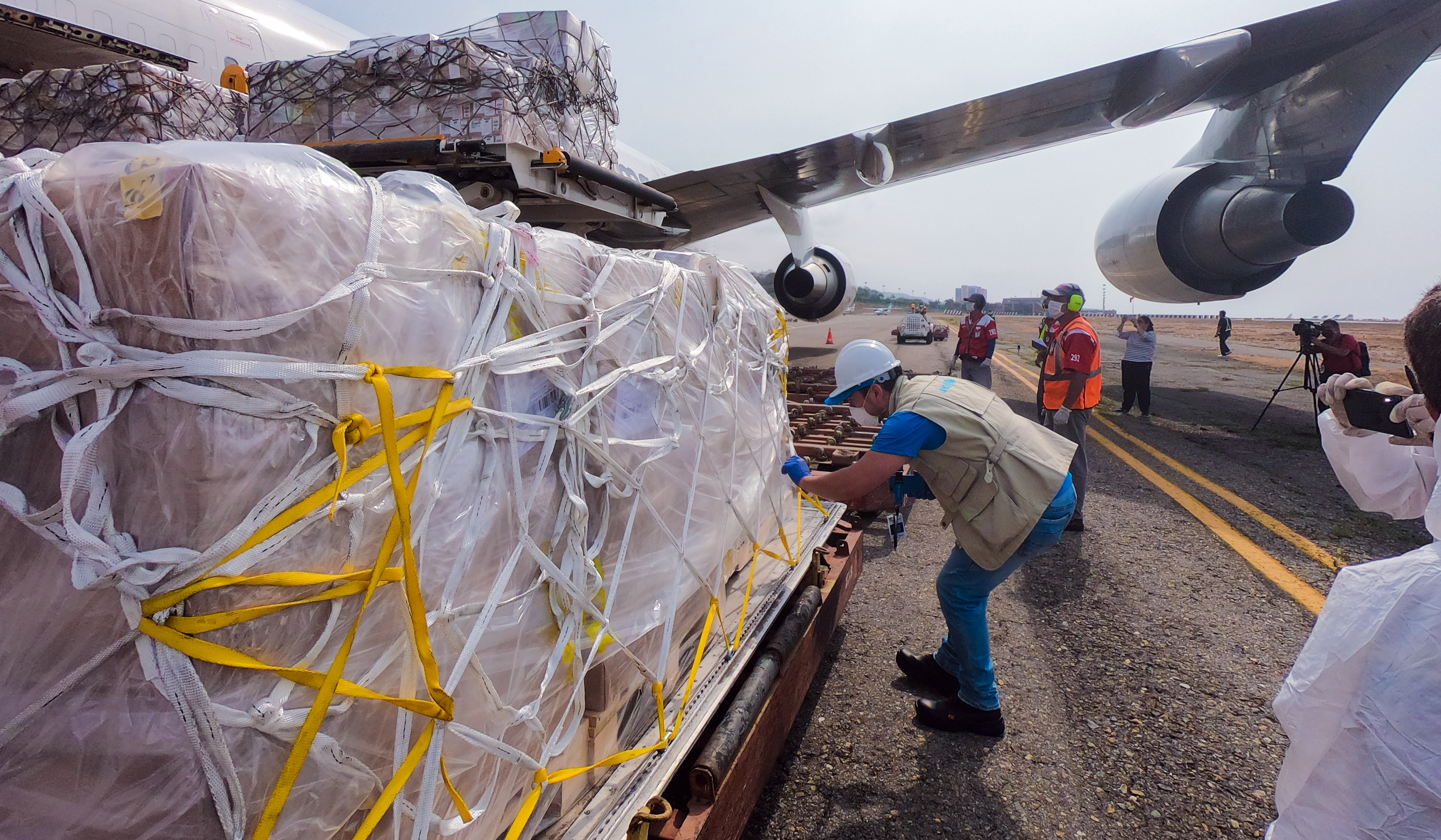 UN teams worldwide galvanize resources to support governments’ response to COVID-19. We have highlighted some of the collective efforts as of 24 April 2020.

In Côte d’Ivoire, where there are 952 confirmed cases, the UN Resident Coordinator, Philippe Poinsot, and the UN team are supporting the Government in its response to COVID-19. As with many African countries, the economic impacts have hit the country first, even before the health crisis developed, with many sectors currently in distress and livelihoods deeply impacted by a partial lockdown.

The UN team is supporting with policy advice from lockdown measures to advising on cash transfer payments, as well as the overall governance mechanism for the national response.

The World Health Organization (WHO) is directly supporting the Government’s Emergency Health plan, while a joint humanitarian platform enables the Government and the Resident Coordinator/Humanitarian Coordinator to gather all humanitarian partners, national and international, on a weekly basis. This led to a joint US$355 million response plan covering water and sanitation, nutrition, education, protection and communication.

The UN is also working together on aid coordination and resource mobilization, with key international partners and the World Bank, as well as supporting operational activities.

In Chad, where there are 33 confirmed cases of the virus, the UN Resident Coordinator has reiterated the UN’s continued support during all steps of the response to the pandemic, from addressing the immediate health needs to the medium- and long-term social and economic impacts.

The UN team, led by WHO, has been working with the Government to provide immediate support to contain the spread of the virus.

The UN team has helped with emergency purchases of lab and other medical equipment, as well as setting up safe isolation sites and to adapt health structures to manage cases. WHO has trained medical personnel to test and analyse exam results and care for COVID-19 patients.

The team has contributed more than $8 million at country-level so far, in line with the Government’s Contingency Plan.

In Guyana, as of 24 April, there have been 73 confirmed cases of the virus. The UN team in the country has been supporting authorities in the areas of health, economic recovery, human rights, and logistics, among others.

The Pan-American Health Organization (PAHO) is providing training and test kits and is training government’s staff on risk communications and on checking the health conditions of those arriving in the country. Together with UNHCR, it has also provided personal protective equipment. UNHCR is offering nearly 50 pre-manufactured housing units to serve as health facilities.

The Resident Coordinator there, Mikiko Tanaka, is working with UN entities to provide social protection to the most vulnerable to prevent them from sliding into poverty, while the UN Population Fund (UNFPA) is helping the Government to integrate gender-based violence prevention into the response plan.

Also, the International Organization for Migration (IOM) and UNHCR are distributing food, hygiene and other supplies to more than 4,000 migrants and refugees who have come from Venezuela into Guyana.

The UN team in Myanmar is supporting the Government’s efforts to protect all groups of people, including persons held and staff working at detention facilities. The UN Office on Drugs and Crime (UNODC) is working with authorities on a short- and medium-term preparedness plan for prison settings.

Through a health access initiative backed by the governments of Sweden, Switzerland, the United Kingdom and the United States, the UN’s Office for Project Services (UNOPS) is purchasing infection control supplies, including masks, gloves, soap, hand sanitizer, thermometers and personal protective equipment, supporting the UN’s work in prison settings.

The team is also boosting access to information and vital health care services for those with drug use disorders and for people living with HIV, with tuberculosis, also backed by the Joint United Nations Programme on HIV/AIDS (UNAIDS) working with authorities and NGOs.

The UN Resident Coordinator in Myanmar, Ola Almgren welcomed the Government’s pardon and release of close to 25,000 people on 17 April, in addition to ongoing efforts to strengthen sanitary procedures in prisons and detention facilities.

Mr. Almgren reiterated the UN’s support to the government’s response to COVID-19 across all areas, to leave no one behind in all our COVID-19 preparedness and recovery efforts, in the humanitarian, development and peacebuilding efforts. There are 127 confirmed COVID-19 cases in Myanmar.

In Papua New Guinea, there are seven confirmed cases of the virus. The Resident Coordinator there, Gianluca Rampolla, has mobilized the humanitarian country team to assist with the national health preparedness and response plan.

The UN team —including FAO, IOM, UNDP, UNFPA, UNICEF, UNOPS, UN Women and WHO— is also helping the government in areas including water and sanitation, social protection, education, food security, supply and logistics, as well as information management and risk communication.

The UN on the ground quickly brought development partners, such as the World Bank and the European Union, together with donor governments like Australia, India, Japan, New Zealand and the United States, as well as local authorities to all work together to fund essential equipment to fight the disease.

Approximately 30 tents were purchased and are being set up in the capital, Port Moresby, and in all other priority provinces. A million sets of personal protective equipment, as well as ventilators, ambulances and tents are being procured. The UN team is also helping to set up isolation and quarantine wards and pre-triage facilities for the whole of Papua New Guinea.

We are also closely coordinating with the Government, the World Bank and the Asian Development Bank to carry out a socio-economic impact assessment to identify priority needs to save livelihoods and lift the economy.

In South Africa, there are nearly 3,500 confirmed cases of the virus, and our team there is supporting the Government’s efforts to address immediate health needs as well as the pandemic’s economic and social impacts.

The Resident Coordinator, Nardos Bekele-Thomas, is regularly consulting with the Government, our development partners, civil society and others to ensure the response is coherent and responsive.

For its part, UNHCR has made an additional US$600,000 contribution to the Government’s response, in addition to its existing $6.8 million programme.

The UNODC unit in South Africa has donated personal protective equipment to shelters for women seeking refuge from abusive partners, while UN Women is helping women farmers with safety measures and travel permits so they can continue selling food in markets.

With South Africa having a high HIV infection rate, UNAIDS is distributing medicine to people living with HIV/AIDS or other diseases such as TB, which make them vulnerable to the COVID-19 virus.

In Togo, even before the first case was confirmed in early March, our country team has been supporting the Government with its preparedness plans to address health needs and the impact on livelihoods.

Togo currently has 83 confirmed cases, and the UN team there has sent dozens of experts – including epidemiologists, medical doctors and others – to work directly with the Ministry of Health in areas including case management and the monitoring and tracking of contacts.

WHO has embedded an epidemiologist and other staff to help with incident and data management and risk communications. Also, under the WHO’s auspices, the UNDP deployed three medical doctors to support monitoring and tracking of contacts, while UNICEF provided communications expertise.

The UN in Togo counts on WHO to head the team’s work on health, while UNICEF oversees education and social protection. For its part, UNDP is supporting the Government’s evaluation of the social and economic impact of COVID-19.

The Resident Coordinator there, Damien Mama, is holding consultations with international partners to support the national response to the pandemic.

The Resident Coordinator in Uganda Rosa Malango, today launched a $316 million emergency appeal to respond to the pandemic. This appeal targets nearly 13 million people and focuses on saving lives and livelihoods. The UN team is also redirecting nearly $13,5 million of its regular funding for the COVID-19 response.

Working closely with governments at the national and local levels, UN entities will deliver the work in partnership non-governmental organizations and the Uganda Red Cross. The new plan covers health, food security, social protection, and refugees, among other areas. In addition to this virus, Uganda is also experiencing outbreaks of Yellow Fever, measles and Crimean Congo Hemorrhagic Fever.

The Resident Coordinator alerted that the pandemic risks impacting one of East Africa’s most important economies with potentially devastating consequences on extremely vulnerable people, such as the 86 per cent of women and 91 per cent of youth in the informal sector, child-headed households, refugees, the elderly, the disabled, people living with HIV or tuberculosis, as well as internally displaced people.

Ms. Malango stressed the need to ensure that Uganda achieves the Sustainable Development Goals to ensure zero hunger and access to basic services, including health, sanitation, and education. There are currently 56 confirmed COVID-19 cases currently in Uganda.