Women in the lead: Meet seven inspiring grassroots leaders from around the world 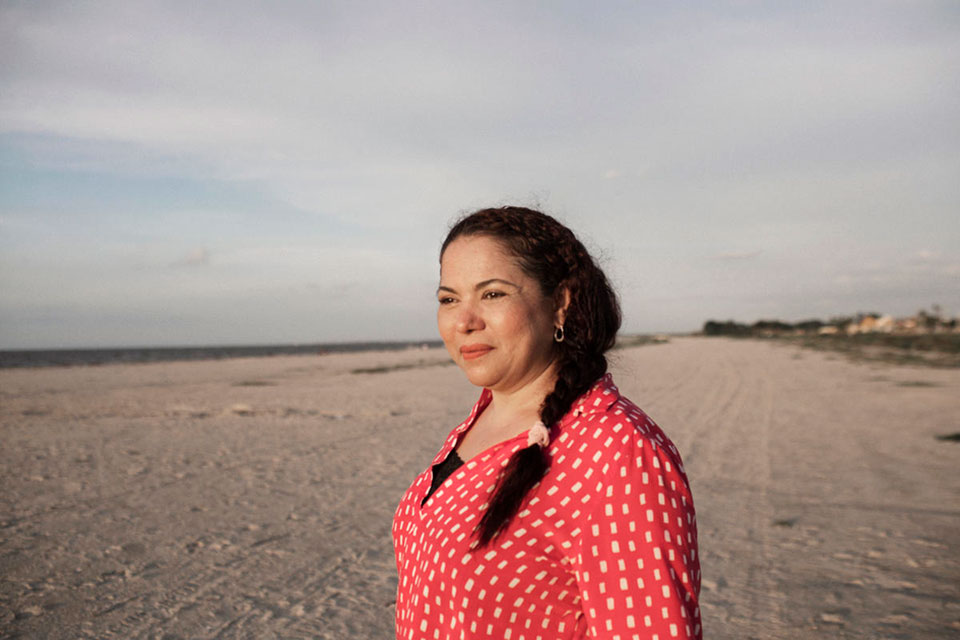 This story was originally published by UN Women.

The data is clear.  Women are in public decision-making roles more than ever before, but equality is far off: women hold only about 21 per cent of ministerial positions globally, and only 22 countries are headed by a woman. At the current rate of progress, gender equality will not be reached among Heads of Government until 2150, another 130 years.

Yet, women persist, and continue to prove that when they lead, they bring transformative change to their communities and the world. Such change is vital in an era of COVID-19, climate change, deepening inequalities, conflict and democratic backsliding.

The United Nations is working around the world to enable more women to take their rightful seats at decision-making tables. Here are the voices of just seven women and girls who, with UN support, are creating change.

Mayerlín Vergara Pérez sleeps with her phone on the pillow.

As the director of Fundación Renacer (or “Foundation Rebirth”), a home for dozens of children and teens who have survived sexual violence and exploitation in Riohacha, she never knows when she might get called in to resolve a crisis.

“Sexual violence has all but destroyed their ability to dream,” said Pérez. “It’s stolen their smiles and filled them with pain, anguish and anxiety. The pain is so profound, and the emotional void they feel is so deep that they simply don’t want to live.”

In recognition of her work, UNHCR named Pérez the laureate of the 2020 Nansen Refugee Award, a prestigious annual prize that honors those who have gone to extraordinary lengths to support forcibly displaced and stateless people.

Read more about Pérez’s work in this story by UNHCR.

Elena Crasmari, the only woman in her local council in Moldova

Elena Crasmari was fed up with not being able to access the medical centre in her village of Dolna, a rural community of 1,155 people in Moldova. She couldn’t take the stairs and had to get on her hands and knees to enter the building, because of her disability.

“I went to the town hall to ask them to help me do something about the stairs of the medical facility,” Crasmari recalls. “The mayor handed me a bag of cement and some sand and told me I had to do it myself. After this, I decided to run for office.”

Since being elected as a local councilor, one of her first projects was to renovate the village medical centre.

Amina Mirsakiyeva paves the way for women in science in Kazakhstan

“I broke the system,” says Amina Mirsakiyeva, a researcher for Karzeis, the largest manufacturer of optical systems in the world.

Her journey to a career in chemistry was not easy in her home country Kazakhstan, where being a scientist has low prestige and women are expected to opt out of their careers to start and take care of their families.

Mirsakiyeva decided to apply for a doctoral programme in chemistry in Sweden and left Kazakhstan in 2012. She is now based in Germany.

“All my social activities are aimed to support women and help to inspire as many people as possible,” she says.

Mirsakiyeva created a network for women scientists from Kazakhstan. She also organizes breakfast meetings for businesswomen and immigrants.

Mirsakiyeva tells her story on UNDP’s new regional online platform for gender equality in STEM in Europe and Central Asia.

Read more about her in this story by UNDP.

Chepkateke is the Chairperson of the Karita Women’s Network, in northern Uganda, a coalition formed under the Women Networks for Gender Equality, supported by the EU-UN Spotlight Initiative.

Chepkateke connects women experiencing violence with justice and health services, which is especially important during the pandemic.

“Women have suffered the most during this period,” she says. “With the closure of markets and a ban on public transport, they had no way of selling their produce or conducting their businesses. Domestic violence has increased tremendously.”

Chepkateke hopes to take her campaign for equality even further by becoming a Councillor in Karita Sub-County.

Belen Perugachi was just 12 years old when she became an advocate for indigenous rights by joining the Children and Adolescents Group of Pueblo Kayambi in Ecuador.

At 16, she's the youngest member of the Rights Protection Council of Cayambe Municipality. Her ascent to Council Vice President in 2019 marked the first time that a teen was elected to the position.

“I want people in rural areas to have the same opportunities as people in cities,” she says. Agriculture and livestock are the primary source of income for many families in the area. When COVID-19 hit and the main market closed in Cayambe, Perugachi and her youth group stepped up, opening a new marketplace to support women and their families.

Perugachi is active on the global stage as well. In 2018, she travelled to Chile for the Economic Commission for Latin America and the Caribbean, to advocate for indigenous rights.

“My participation sent a message to indigenous girls like me in Latin America,” she says. “I told them to stand up for their rights and feel proud of their traditions.”

Get inspired by more girls leading changes in this story by UNICEF.

When reports of domestic violence spiked during the COVID-19 lockdown last spring, bus conductor Kelsang Tshomo checked in on friends and colleagues in Bhutan’s capital city of Thimpu every few days to make sure they were alright and provided information if they needed help. Tshomo had learned about gender-based violence prevention and response at an information session conducted by UNFPA and its non-profit partner RENEW (Respect, Educate, Nurture and Empower Women).

“The training made me realize that any form of abuse – verbal, emotional, sexual or physical – is not acceptable,” says Tshomo, who is also a peer counsellor for a staff of 87 conductors and drivers for Thimpu City Bus Services.

In her counsellor role, she advises her peers on reporting cases and getting support.

“To bring about a real change,” Tshomo says, “women have to provide each other the space to share, learn and grow together.”

Read more about Tshomo’s work in this story by UNFPA.

Editar Ochieng, a survivor changing the narrative on sexual violence in Kenya

As a six-year-old girl, Editar Ochieng was sexually abused. At the age of 16, she was gang raped.

Ochieng grew up in Kibera, the largest informal settlement in Kenya’s capital, Nairobi, where sexual and gender-based violence is pervasive.

When she was 26, Ochieng founded the Feminist for Peace Rights and Justice Centre in Kibera, an organization supporting survivors of sexual and other forms of violence.

Gender-based violence has become even worse during the COVID-19 pandemic, with lockdowns creating more family and financial stress.

In 2020, UN Human Rights and UN Women — under a project called Let It Not Happen Again — provided support to Ochieng and other human rights defenders to better help gender-based violence survivors.

"We need to reclaim our power so that we raise a different generation that understands there is power,” she says, “but there is power that you can control.”

UN Human Rights is featuring Editar Ochieng, as well as other women human rights leaders, in the #IStandWithHer campaign.