"My voice, our equal future": The Spotlight Initiative amplifies the voices of young female activists in Niger 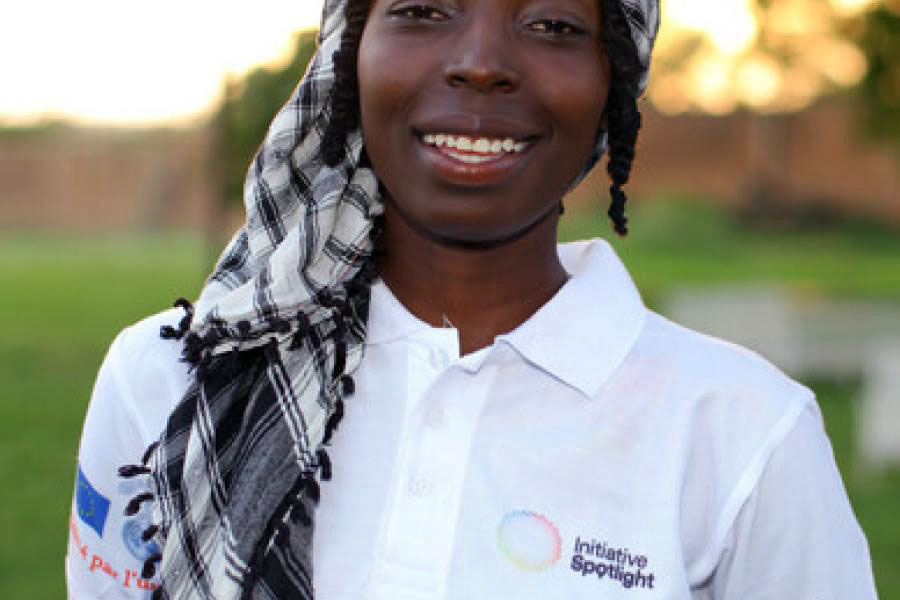 What do a NASA scientist, a disability rights activist, a social media campaigner, a women’s rights defender, a midwife, and two slam poets have in common - apart from their beaming smiles? They are all committed advocates working to end violence against women and girls in their country.

Niger has the highest child marriage prevalence rate in the world according to the UN Children's Fund (UNICEF), with 76 per cent of girls married before the age of 18 and 28 per cent married before they turn 15. In 2017, the government raised the mandatory school leaver’s age for girls to 16—a significant step in combatting child marriage—but there is still work to be done.

To celebrate the International Day of the Girl Child, the UN-EU supported Spotlight Initiative partnered with these seven young advocates. The women not only speak out against gender-based violence—including harmful practices such as child marriage—but they show the world exactly what is possible when girls have equal opportunity to succeed.

“Our role as women is to have each other’s backs,” says Justancia Débora Dianga-Mbembo, a midwifery student and writer. “Violence can happen to any one of our friends or family.”  Débora knows, because it happened to her.

Two years ago, she experienced a pregnancy loss as the result of domestic violence. Today, she transforms her experiences into writing, and hopes to publish her work in an effort to help other young women and girls who may find themselves in a similar situation.  “I write a lot because I believe that as girls, we have to be actors of our destinies. By raising our voices, we ensure an equal future for all girls in our country,” she says.

A passionate advocate for women’s rights, she is studying midwifery with the intention of specializing in gynecological obstetrics to ensure that disadvantaged girls and women have access to quality reproductive health services.

Yasmina Mohamed Boubacar was raised in an orphanage after her mother passed away when she was born. She understands well the life-changing power of educating girls. “I benefited from all possible opportunities for a child, starting with getting a quality education,” she says. “I graduated from high school at the age of 16 and now, as a young leader, I do a lot of community work and sensitization on issues such as child marriage, girls’ education and gender-based violence.”

Today, she is the Secretary General of Taimakon Marayu, an organization that helps orphans in Niger—many of whom are vulnerable girls.

“I like travelling to different places and setting up listening and awareness clubs for girls. They need a platform to express themselves and simply share their grievances and aspirations,” she says.

She recently appeared on RFI radio programme  ‘7 milliards de voisins’ to speak about education in the Sahel region, and met with the French president at a side event at the G7 Joint Ministerial Meeting on Education and Development in Paris.

Nana Natitia dreams of “a Niger where women are protected from all forms of violence, and where their right to an education will no longer be a struggle [against expectations] but an achievement.”

One of the first things you notice about her is the brightly coloured turban she wears in place of the more common hijab or scarf. The turban is typically only worn by men, but is one of the small ways Nana is resisting gender expectations in her daily life. “I asked if turban was for men only… I decided to wear it to embrace my culture, my religion, my identity,” she says.

For the past year, she has been the Executive Secretary of Global Dignity Niger, which aims to empower vulnerable women and people with disabilities by improving their opportunities for social inclusion and shifting harmful public attitudes.

In 2018, she attended the Clinton Global Initiative University annual meeting in Chicago to speak about creating an equal future for women and people living with disabilities.

Dr. Fadji Maina is no stranger to breaking barriers. After gaining her Ph.D. in Hydrology from the University of Strasbourg at the age of 25, she became the first Nigerien scientist to join NASA. Fadji uses high-performance computing and satellite data to understand the impacts of climate extremes and wildfires on water resources, and is a testament to the critical need for women’s full and equal participation in development.

"Our mothers and daughters deserve a better world without violence in which they will blossom and use their talents and extraordinary potential to contribute to the development of our countries,” she says.

Rachida Mamadou Oumarou manages several high-profile social media pages for female audiences and boasts 20,000 followers on her personal Facebook page alone. But don’t call her an influencer – what drives Rachida is her mission to give women and girls the tools they need to succeed. One of her pages, Matan Niger (Women of Niger), mixes beauty, culture and health content with messages of gender equality and information on women's rights and interests.

“In whatever I do, I see myself contributing to a better future for all the girls and women of my country because we are its future,” she says. “It’s one of my greatest dreams to help women understand violence and the issues affecting them, so we can improve their lives on every level.”

Norratou Oumarou Hega and Hama Daouda  Fatouma—better known as Nourath Nourath and Fa.2.Maths.A—are two slam artists from Niamey. The two friends use the spoken word as a way to discuss subjects that are often considered taboo in Niger, such as rape and female genital mutilation (FGM).

Nourratou has represented Niger several times at international festivals, including in Togo and Burkina Faso, and is currently working to publish a collection of slam poetry entitled ‘My Mirror, My Distress’ dealing with themes of sexual violence, child marriage, and other issues affecting girls in Niger.

Fatoumata has also been recognized for her art form, winning the second National Slam Poetry Cup last year. “I see slam poetry like therapy. Imagine how unconventional it is for a young woman of my age to express herself through a vocal art, to speak up about abuse and violence to a predominantly male audience and have their full attention.

“We also have girls in the audience, who either learn about violence and related issues, or find support through our words and understand that they are not the only one going through hidden violence…Through slam poetry, we can overcome ignorance because ignorance does a lot of harm.”

The Spotlight Initiative has partnered with the Government of Niger to prevent child marriage and gender-based violence through awareness-raising activities, community mobilization, girls’ education, institutional support and by engaging religious and traditional leaders.