What a year it was: The UN and the world response to crisis in 2020 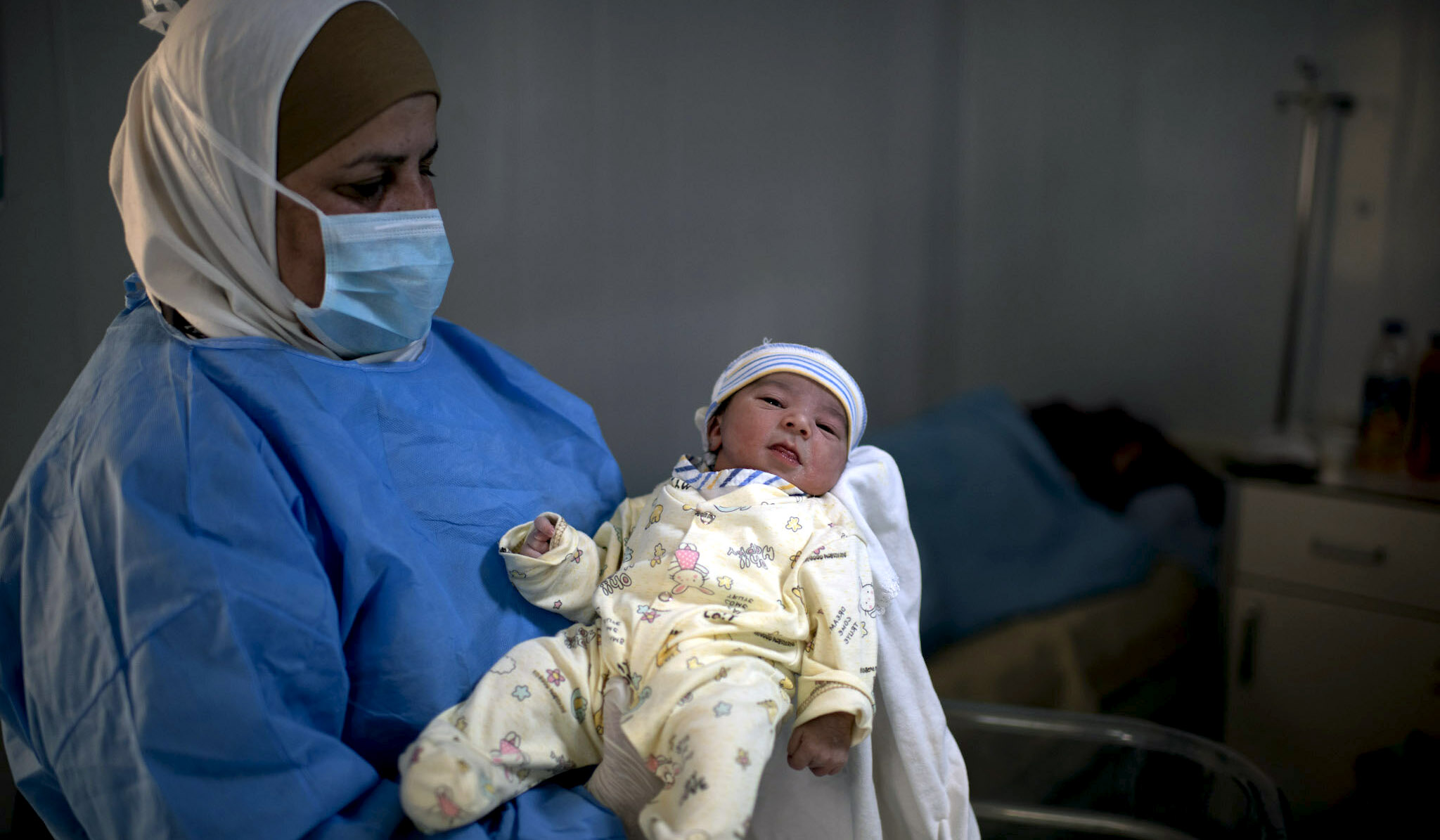 Caption: Despite COVID-19 prevention measures, hospitals and medical facilities in Azraq Camps, with a population of 40,000 Syrian refugees as of April 2020, continue to operate.
Photo: Mohammad Hawari for UN Jordan

By the end of 2020, COVID-19 had killed nearly 2 million people and left many millions more with lasting injury. It also led to larger crises in health, jobs, education, domestic violence, migration, and more.

That’s a lot of fires to put out.

But the United Nations is built to deal with many challenges at once. In this article, we look at how the United Nations—referred to below as “UN teams” or “the UN,” but meaning the whole family of UN entities—worked together to confront the pandemic’s many effects and other urgent challenges. Indeed, the UN Secretary-General called for a global ceasefire so the world could apply its energy to fighting the pandemic.

Also in 2020, the World Food Programme was awarded the Nobel Peace Prize. This was an affirmation of the vital role that the United Nations plays in creating a world where everyone can breathe easy, make a living, fulfill a dream. The UN family is mobilizing support for all these efforts, and for the Sustainable Development Goals—our guiding star to get through the pandemic and beyond.

COVID-19 vaccines are already being distributed. Let’s take a look at the past year, and remember that now is the time to redouble our efforts.

1. COORDINATION: Playing on the same team, more important than ever

Think of a football team. To win, all the players have to be working together. The same principle is true with the UN, only the stakes are higher. Every day all around the world, the UN is working to end poverty, make peace, build gender equality, and now, stop to a pandemic. The better the teamwork, the more progress we’ll be able to make. That’s why the UN is constantly working to coordinate better. A few examples: a more cost-effective global strategy, clearer leadership roles for UN Resident Coordinators within each country, and stronger collaboration between UN offices in different countries. In these ways and more, the UN is tightening its teamwork so the world can score the biggest goals of all—the Sustainable Development Goals.

2. THE MOST VULNERABLE: Leaving no one behind

COVID-19 is affecting people around the world, but it’s hitting some countries and people harder than others. The UN is committed to reaching those left furthest behind—among them, indigenous people. For example, people in 520 indigenous ethnic groups throughout Latin America and the Caribbean have fewer hospitals, face more job discrimination, have access to fewer essential services, and are disproportionately exposed to other health problems such as malaria or diarrhea. Around the world, the UN is supporting indigenous people and others left behind during the pandemic. In doing so, we’re also helping them get more equal treatment and thrive even after the pandemic ends.

Every single country, even the smallest, poorest, and least powerful, has gifts to offer the rest of the world. Consider the example of Malawi. Despite having a population of just 18 million people and being among the poorest countries in the world, Malawi is a global neighbour. It has contributed peacekeeping forces to multiple campaigns. It is the Global Coordinator for the UN’s Least Developed Country group. It is slated to become president of the Southern African Development Community, and has recently been elected to the UN Human Rights Council.

4. FIGHTING POVERTY: Preventing millions from falling off a cliff

Around the world, cities and whole countries are shutting down businesses, schools, and other daily activity to stop COVID-19 from killing more people and sickening many more. As a result, the pandemic may drive 115 million more people into extreme poverty. The UN is working overtime to prevent as many people as possible from falling over that cliff. For example, Syria was already facing an economic crisis and a protracted violent conflict. In addition to promoting COVID-19 prevention measures, the UN team scaled up an electronic voucher system targeting as many as 70,000 pregnant and breastfeeding women who have extra nutritional needs.

In nearly every corner of the world, women and girls bear the burden of more job discrimination, low wages, violence, hunger, illness, early death, and other ills, as compared to men and boys. What’s more, in many places, they do more unpaid or low-paid work than men, such as eldercare, childcare, housekeeping, and more. Such brutal inequality has only been exacerbated during the pandemic, as women face more domestic violence when isolated at home with abusive husbands, and are harder hit on economic and other fronts. In Samoa, the UN team is supporting survivors of gender-based violence. And in India, a short film backed by the UN and other partners is reaching women affected by domestic violence.

6. ON THE MOVE: Migrants and refugees face COVID-19

Around the world, more people than ever are on the move. This includes more than 250 million international migrants, many of whom have left home due to lack of work, climate disasters, or other causes. Some 80 million people have been forced to leave their homes, nearly 26 million of whom are refugees. For refugees and migrants, their lives and livelihoods are at risk at home, so they leave. Their journeys are often perilous and they are subject to exploitation, abuse, and violence. Now they are even more vulnerable with the advent of the COVID-19 pandemic. Worldwide, the UN is working to support those on the move. This includes in Somalia, where conflict has driven people from their homes to other parts of the country or to refugee camps across in Kenya; they are at higher risk of COVID-19.

The effects of climate change can be seen in increasing desertification, and fiercer and more frequent storms, wildfires, flooding, and other disasters. Such effects kill or injure millions every year, and spur many more millions to flee their homes or get into violent conflict. The UN works around the world to help those affected by disaster, and to slow or stop climate change from having such effects in the first place. In Honduras, tropical storms wiped out fishing, agriculture, and livestock in whole communities, and the UN helped people with shelter and other aid. In Cambodia, the UN is advocating for the greater inclusion of women in the fight against climate change. Whether directly or not, climate change makes those already vulnerable to its effects even more vulnerable to COVID-19.

In Mali, Niger and Nigeria, among other countries, farmers and herders come into violent conflict over land rights. Rising temperatures have shrunk the amount of land available for farming and grazing, leaving farmers and herders to fight over what’s left. In some areas, state authority is all but absent, leaving people unable to rely on the rule of law, but rather to fend for themselves. Women are affected worse than men, and yet they can play an outsized role in preventing or ending conflict. UN teams in these countries are promoting community dialogues between conflicting parties, training women to take leadership roles in peacebuilding, and taking other steps for peace.

The UN advocates for twin approaches to reduce and prevent conflict: humanitarianism, which emphasizes support for people affected by conflict, and development, which creates better living conditions for people and thus removes the causes for conflict in the first place. In Ukraine, for example, more than 10,000 civilians have been killed or injured and 1.4 million people have been internally displaced as a result of Europe’s deadliest conflict in the past two decades. COVID-19 has only intensified the challenges. Tens of thousands of people have been fleeing violent conflict in the Tigray region of Ethiopia, seeking refuge in Sudan. UN agencies are expanding refugee camps, supporting women’s and girl’s safety and hygiene, and creating lasting solutions to conflict.

10. MOBILIZING PEOPLE TO GIVE: Finding funds for life-saving work

Fighting the COVID-19 pandemic, stopping climate change, and saving lives takes the commitment not only of UN staff and partners in all countries, but also of the world’s people. It also takes money. From Chad to Guyana to Myanmar and beyond, UN teams created comprehensive plans to respond to COVID-19 and all the other challenges facing the countries of the world — and rallied donors to pledge their support. In Thailand, polling suggests that as many as one third of the people have donated cash, food, or supplies during the pandemic, an indication of a generosity of spirit that can be found all around the world.

Produced by the UN Development Coordination Office. Written by Paul VanDeCarr, based on stories as cited.