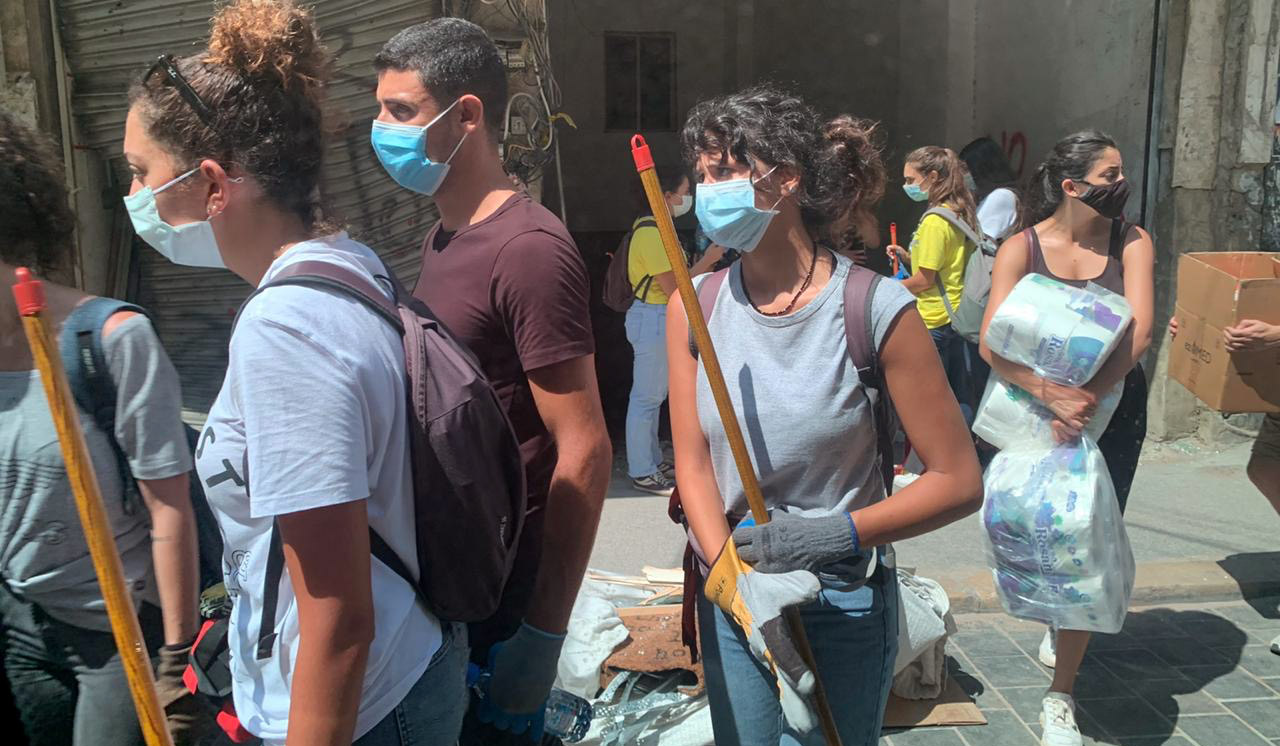 Caption: Youth volunteers supporting in the rubble clean-up and aid distribution in Mar-Mikhael, one of the areas worst hit by the blast.
Photo: UNOCHA Lebanon

“The Beirut port explosion was an explosion of hearts,” says 40-year-old Farah. “This explosion burnt our hearts.” Farah is speaking of the massive explosion that rocked Beirut, the capital of Lebanon, on 4 August. Over 200 people died, and thousands more were injured. The source of the blast was a large quantity of ammonium nitrate—a compound used to make explosives—that had been stored in unsafe conditions.

The colossal explosions sent a mushroom cloud into the air and a blast wave through the city, leveling buildings next to the port and turning houses into rubble.

Farah and her son are speaking in a small booth set up by the UN, on one of the streets most damaged by the explosion, to record people’s perspectives on the explosions.

When the disaster struck the heart of Beirut, Lebanon was already reeling from civil unrest, economic and financial hardship, increasing poverty and unemployment compounded by political tensions and a soaring number of COVID-19 cases. This has been further exacerbated by the heavy burden of Syrian and Palestinian refugees.

Even now, months after the explosions, “the scale of the loss and magnitude of damage remains massive, even overwhelming,” says Najat Rochdi, the UN’s Deputy Special Coordinator, Resident and Humanitarian Coordinator.

“As I walk around Beirut every day,” she adds, “I listen to stories of shock and of loss. Women and men who have never had to ask for help, now reduced to handouts. Families who have had their homes and futures blown away. Children who no longer feel safe in their neighborhoods. Proud businesspeople who cannot access their savings, unable to start again.”

UN agencies and partners “are sparing no time nor effort to provide life-saving assistance to those who were directly affected by this horrendous blast,” says Rochdi. Support has included over 90,000 ready-to-eat hot meals, 44,000 food parcels for households, and 12,500 metric tons of wheat flour distributed to millers across the country. Water, sanitation and hygiene services were also provided to medical facilities, including more than 2,700 new water tanks and pumps.

“The port explosions served as a wake-up call but also as a window of opportunity to build back a better Lebanon,” says the UN’s Najat Rochdi. In the months since the blast, the UN has been shifting gears away from emergency relief and towards longer-term recovery and reconstruction.

Shortly after the explosions, the UN along with European Union and the World Bank produced a Rapid Damage and Needs Assessment to help support evidence-based recovery planning. Based on the findings, the three entities embarked on developing a people-centered Reform, Recovery and Reconstruction Framework, also known as the 3RF. Launched on 4 December, exactly four months after the blast, the 3RF presents solutions to the problems facing all of Lebanon.

“We are not solely focusing on rebuilding Beirut and ignoring the Lebanese who are living in poverty elsewhere in the country,” says Rochdi. “We have committed to ‘Leave No One Behind.’”

“I thought today is the day I was going to die,” says a young man named Rakan who was overwhelmed by memories of how the explosions crushed his house, leaving his feet badly injured.

“I fear that another similar thing might happen again,” says a woman named Roula, who lost her father in the blast and who, even now, jumps at every small sound on the street, trembling at the prospect of another disaster.

In spite of the blasts, many Lebanese people are undeterred, such as one man who says, “Despite everything, we are staying in Lebanon.”