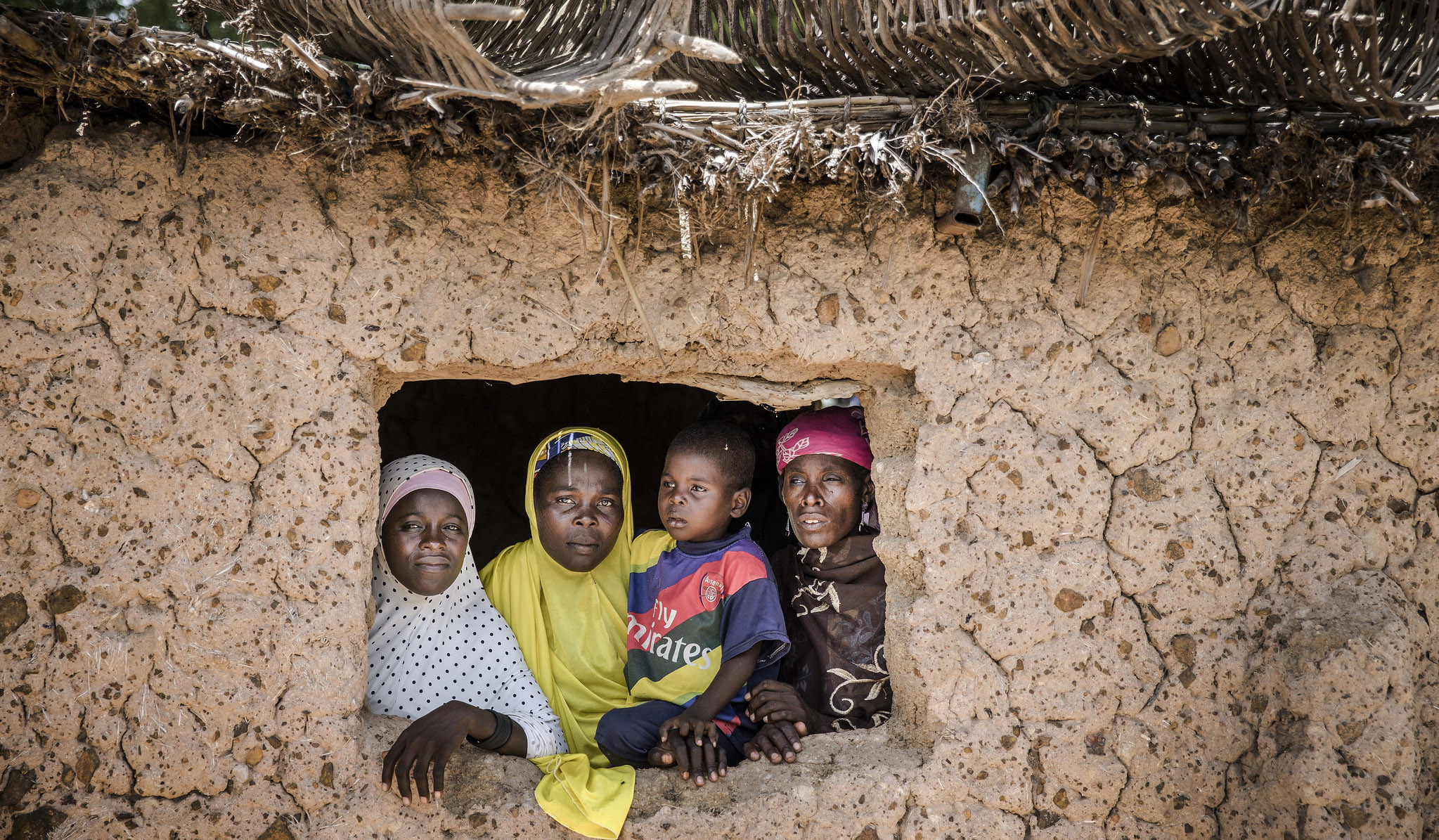 Caption: A family in Maradi, Niger. (Photo taken prior to the COVID pandemic.)
Photo: ©FAO/IFAD/WFP/Luis Tato

Life can be hard in the rural villages of southern Niger. Sometimes, like last year and the year before, insects destroy the crops. And not least of all, there’s the weather. The mercury can soar past 40 degrees in the hot season, and the rains can come hard and fast in the wet season.

One day, recalls Asma Abdou, “A heavy rain started to fall at 4:00 in the afternoon. At 7:00, I put the children to bed under a mosquito net”—that’s to protect them from insect-borne diseases such as malaria.

“At dawn the next morning, I heard an atrocious sound. The roof had collapsed. The neighbours came to help and search for the children but everything was in ruins. The children were all dead. God had brought them back to him.”

This sort of disaster doesn’t happen often in the tiny villages, but the daily existence can be punishing. Fortunately, the people have each other. The neighbours who come to check on you. The other mothers who grieve with you. The local cooperatives that band together to share the work and lighten the load.

It is these local groups that the United Nations is supporting, to make difficult circumstances a little easier for women in twenty villages in the regions of Maradi and Dosso, in the south of Niger.

Together, UN Women, the Food and Agriculture Organization (FAO), the World Food Programme (WFP) and the International Fund for Agricultural Development (IFAD) have banded together in a joint programme to give women in these villages the tools and skills they need to work better and rest easier. The programme is called “Accelerating Progress Towards Rural Women’s Economic Empowerment,” or RWEE.

Among the tools contributed were so-called “multifunctional platforms”—a gas-fueled engine that can be connected to different equipment and used as a pump, a grain mill, a husker, a generator, or for other purposes. In addition, standpipes were extended to provide a communal water supply. Dozens of carts and pulleys were added to on the community wells, and donkeys and cattle carts were donated.

These small things have made a big difference in the daily lives of over 17,000 women. Indo Garba lives in a village called Koguia, south of Maradi. “The grain mills, huskers, and cattle carts have reduced the drudgery of household tasks,” she says. “The grain mills and huskers help us process and preserve millet, peanuts and beans to produce doughnuts, cookies, oil, and other products, which we sell at market.” Some of that income is put into maintaining the equipment, or into the network’s collective savings bank.

The joint programme not only helps ease the burden of household tasks, it trains women in leadership and other skills, so that they have more power in their communities. Over 4,600 women have benefitted.

One of them is Saoudé Garba. “At our women’s group meetings, we discuss the difficulties we face and try to find ways to overcome them,” she says.

The group recently organized to support one of their members who stood as a candidate in municipal elections. Now, having shown themselves a powerful force, the women are consulted in the management of local affairs.

Next, the women’s network aims to support one of their members who has submitted her candidacy to sit in the National Assembly.

Whatever happens with that race, she says, the benefits of the joint programme are clear.

“We feel more empowered. We are not afraid to express our opinion in front of men.”