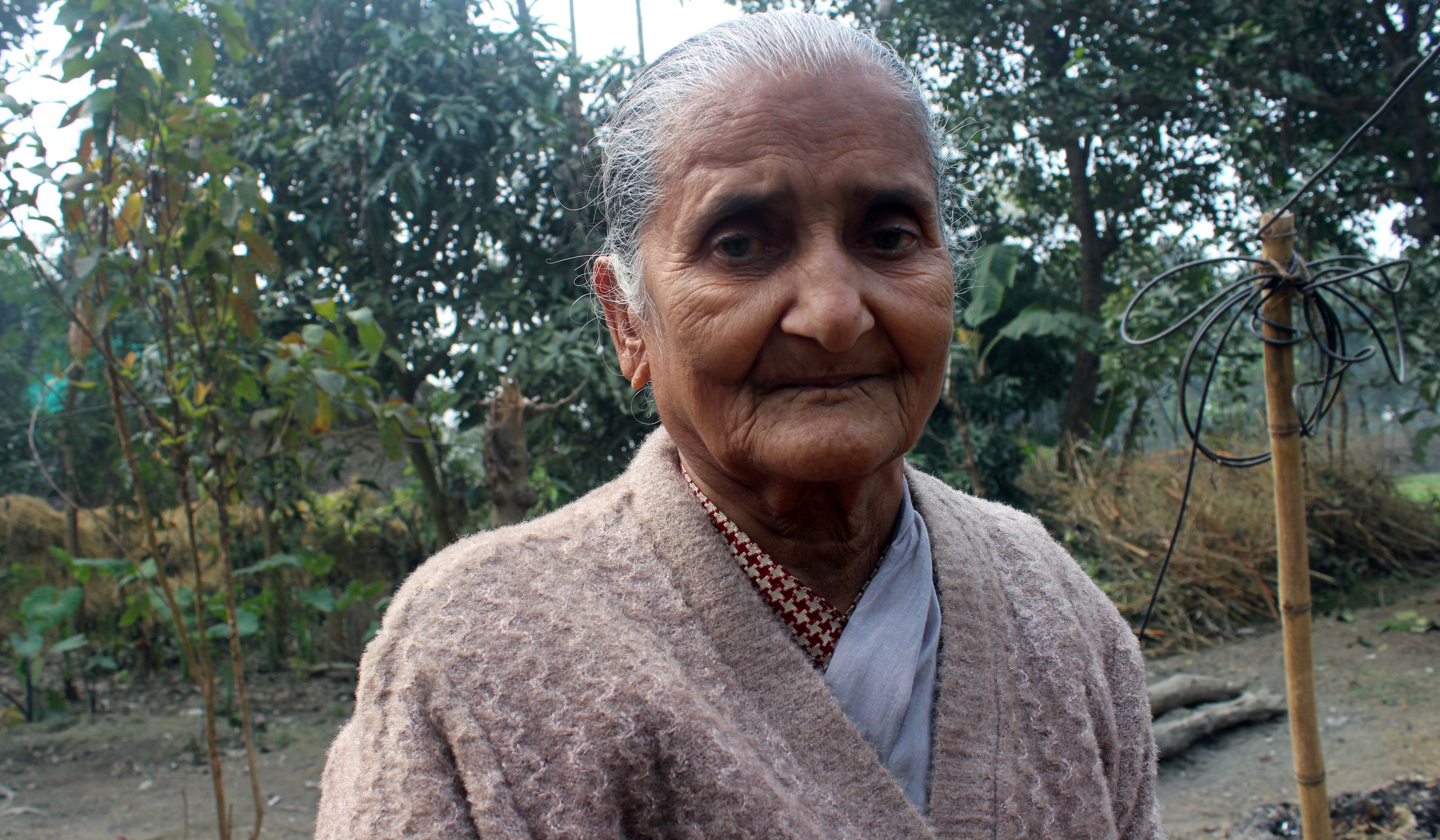 Caption: Ratna Khawas has worked for decades to ensure that everyone in her village in Belbari, Nepal has access to toilets.
Photo: Renu Kshetry

Born into the privilege and comforts of a high-caste Brahmin family in Nepal, Ratna Khawas’s life changed drastically when she got married to someone outside her social class, in 1968.

She and her new husband moved to his home village in Belbari, where there were no toilets or handwashing facilities.

“I got the shock of my life,” she said. “I had to go to the open field for defecation, as there were no toilets in the whole community.”

That shock set her on what became a lifelong quest to improve sanitation for her and her neighbours.

In a new home, a new way of life

Growing up in a wealthy family in Dharan, 40 miles west and a world away from Belbari, young Ratna was encouraged to pursue her education. In 1962, she became the first young woman in the region to obtain her “School Leaving Certificate”—having passed a notoriously difficult exam—and went on to become a teacher at Kali High School. That’s when she met and fell in love with Kami Lal Khawas, a young man from an underprivileged community who had a good education.

“I was so much in love with him, as he was an educated person,” said Ratna. “I felt that was enough for me and we got married,” she said, and followed him back to his village as his wife.

Everything about her new family was different — their habits, their cuisine, their culture. The adjustment was made even more difficult because her father-in-law refused to allow her to continue teaching. For him, a strong advocate of a patriarchal society, it was unimaginable for women in the community to step outside their household for any kind of income-generating work.

“I felt that my world had collapsed. I did not know what to do. I had nowhere to go, as the doors of my parents’ house were closed to me,” says Ratna, recalling the consequences of marrying outside her caste.

The most glaring challenge confronting Ratna in her new life was the complete absence of sanitation and hygiene facilities, which she knew were important for good health and personal dignity. Dharan, where she had lived as a girl, was a developing city where most of the houses had toilets. With its lack of such facilities, Belbari seemed a backward place to her. She recalls:

“I tried to convince my husband to build a toilet in his house, but he refused to go against his family’s tradition.”

Ratna was frequently ridiculed by neighbours as an outsider and as someone “always talking about feces and urine.”

In 1975, after her father-in-law’s death, Ratna’s husband allowed his wife to participate in a women’s empowerment programme. After her training, she became a public health professional for the Belbari constituency, working for the family-planning division of the Ministry of Health.

“I saw that women there had no idea about malnourishment during pregnancy, or hygiene and sanitation,” she recalls. “I felt that, as a public health professional, I could help them better their lives by at least providing them with medicines such as iron capsules, and contraceptives.”

Over the next ten years, Ratna visited 250 households in the community, educating women about reproductive health, sanitation and hygiene, nutrition, and other health topics.

At that time, sending girls to schools was seen as a waste of money because, when they were married, they would simply go to live in someone else’s house. Seeing that not a single girl in the village had been educated, Ratna convinced villagers to send their daughters to school.

Still, sanitation remained her top priority. Faced with opposition from her extended family, she was unable to build a toilet at home. In 1989, she rebelled and left the family home with her four children. They settled on a piece of land that was owned by her husband, where they built a latrine and then a home.

It wasn’t long before her husband joined her. Then her nephews started building toilets for their homes. Slowly, as they could afford it, other members of the community also began to install latrines, because they had learned that access to a toilet gave them a safe space to manage their sanitation needs.

Life in Belbari now is a far cry from the situation Ratna found when the newlyweds arrived in the village over half a century ago. Today, with Ratna’s help and inspiration, nearly all of Belbari’s 250 households have toilets.

“My only wish now is to build toilets for the seven remaining households,” says Ratna. Her efforts have received financial support from Nari Bikash Sangh (Women’s Development Forum) and local government and technical support from UN-Habitat in Nepal.

UN-Habitat office in Nepal has advocated for an end to open defecation, and with its support, 600,000 improved toilets have been built across the country. In the past ten years alone, UN-Habitat has contributed to nearly one-third of all the territory that is now free of open defecation.

“This was in the region of Tarai, where the total toilet coverage was only 13 per cent. Together with the government, we achieved 100 per cent within four years.”

The UN Children's Fund (UNICEF) has been working to improve sanitation facilities and hygiene practices for children,  especially girls, in health centres, early-childhood centres, and schools. All such facilities are to be disability-friendly.

The new Sanitation and Hygiene Fund

Lack of proper sanitation and hygiene are barriers for the world’s most disadvantaged, threatening the foundations of economies and health.

To ensure no one is left behind in communities such as Belbari, the new Sanitation and Hygiene Fund (SHF) was launched on 17 November as a global financing mechanism to support country-driven programmes to bring sanitation and hygiene to all.

It is seeking US $2 billion over the coming five years to provide a 21st-century solution to the decades-old crisis in sanitation, hygiene, and menstrual health. Investing in a public-private approach, the fund aims to capitalize on the strengths of its in-country and global partners.

The SHF will invest in people like Ratna and her community. “I will consider the campaign a success once the senior citizens and middle-aged men make it a habit to use toilets regularly,” she says.

With support from SHF, Ratna’s dream may be realized the world over.